Who was 'Karl Marx'

Karl Marx was a philosopher and economist famous for his ideas about capitalism and communism. Marx, in conjunction with Friedrich Engels, published "The Communist Manifesto" in 1848; later in his life, he wrote "Das Kapital," which discussed the labor theory of value. Marx is often criticized for discussing economic theory and the exploitation of the working class while failing to maintain a job for a significant period of time.

Marx's work laid the foundations for future communist leaders such as Vladimir Lenin and Joseph Stalin. His theories, although not popular until after his death, formed the basis of Marxism and served as a theoretical base for communism. He believed capitalism contained the seeds of its own destruction.

Born in Trier, Prussia, which is now Germany, in 1818, Marx was the son of a successful Jewish lawyer who converted to Lutheranism before Marx’s birth. Marx studied law in Bonn and Berlin, and at Berlin, was introduced to the philosophy of G.W.F. Hegel. He became involved in radicalism at a young age through Young Hegelians, a radical group of students who criticized the political and religious establishments of the day. Marx received his doctorate from the University of Jena in 1841. His radical beliefs prevented him from securing a teaching position, so instead, he took a job as a journalist and later became the editor of Rheinische Zeitung, a liberal newspaper in Cologne.

After living in Prussia, Marx lived in France for some time, and that is where he met his lifelong friend Friedrich Engels. He was expelled from France, and then lived for a brief period in Belgium before moving to London where he spent the rest of his life with his wife. Marx died of pleurisy in London on March 14, 1883. He was buried at Highgate Cemetery in London. His original grave was nondescript, but in 1954, the Communist Party of Great Britain erected a large tombstone, including a bust of Marx and the inscription "Workers of all Lands Unite," an anglicized interpretation of the famous verse in "The Communist Manifesto," "Proletarians of all countries, unite!"

"The Communist Manifesto" summarizes Marx' and Engels' theories about the nature of society and politics, and is an attempt to explain the goals of communism. When writing "The Communist Manifesto," Marx and Engels explained how they thought capitalism was unsustainable and how the capitalist society that existed at the time of the writing would eventually be replaced by socialism. "Das Kapital" was a critique of capitalism. 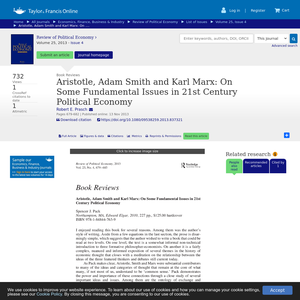 Aristotle, Adam Smith and Karl Marx: On some fundamental issues in 21st century political economy
www.tandfonline.com [PDF]
… Karl Marx also had a theory of financial crises, based on his concept of money as a … Crotty, J. (1985), 'The centrality of money, credit and financial intermediation in Marx's crisis theory … in G. Dymski and R. Pollin (eds), New Perspectives in Monetary Macro- economics, Ann Arbor …